The history of our chapter is being updated as we receive information from distant alumni. If you have information about our chapter history (such as the 70's which may or may not be hard to remember), please contact our web master.

In March 1956, the Delta Sigma Phi Fraternity chapter at the Missouri School of Mines and Metallurgy (MSM) in Rolla began organizing with representatives from the national office. By April, 'club' was organized with Ralph McCormick as the president. The first 16 members were initiated in May by brothers from chapters at Washington Univeristy and St. Louis University.

On March 10, 1957, Delta Sigma Phi Club at MSM was installed as the Delta Epsilon Chapter of the Delta Sigma Phi Fraternity. It began with 29 charter members, a total membership of over 40, and Fred Dietrich as the first chapter president. The speaker at that formal event was Francis "Pete" Wacker, fraternity Executive Director from 1947-1978. In addition S. O. Smith, President of Delta Sigma Phi, and Curtis L. Wilson, Dean of the University, made presentations. The Faculty Adviser was Wells Leitner and one of the original ACB members was J. C. Alexander (who owned Bishop's Clothing), serving until his death in 1979. 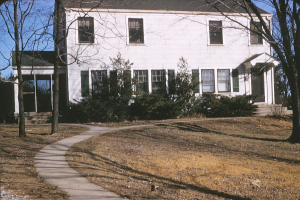 By the chartering ceremony the chapter had purchased a duplex on the north side of Rolla where Thomas Jefferson housing is today, remodeled it over Christmas break, and moved in 31 residents. Several other buildings were included in the property and the chapter had an old military building moved from campus to the site for additional housing.

Many of the initial members of the chapter were Korean War veterans looking for a more mature environment than was offered elsewhere. As a result hazing and many other childish activities were banned from the start. The added experiences of the older members helped in the development of the chapter and the house itself.

Delta Sig at Rolla hit the ground running in campus leadership and actually had the highest grade point average on campus even before being formally installed as a chapter.

The university established an area for fraternities to build new houses on Highway E. By this time, Delta Sig in Rolla was flourishing and out of room. This led to the construction of new facilities on Fraternity Row in the Fall of 1966. The existing site was sold to the university in order to build the Thomas Jefferson Residence Halls for the school. Surely the fact that the location was only a block from the regional Highway Patrol Headquarters was a coincidence. The new location included a rectangular residential building (long house) and a round social building (round house). 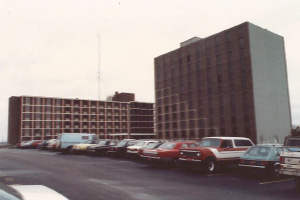 Long house had 36 two-man rooms and a single room designated for the chapter president. There was one phone (364-4192) for the entire house (extension to the round house) with an intercom to notify residents of incoming calls in the evening (one of the new member duties). The room under the president was used for an extensive file system on classes that saved many brothers anguish. Long house had 24-hour quiet hours, except for a half an hour each evening. 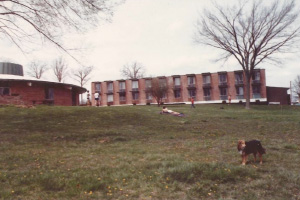 Round house had a small formal living room, large chapter lounge, kitchen and dining room. This is where the only television was located (eventually hooked up to cable). This was the site of memorable parties, frequently in association with another house on campus. There were no quiet hours in the round house and made a great place to take a break from studies. After the old Chemistry Building burned down in the late 1960's, the chapter found the dump site and constructed a patio and barbeque pit from the salvaged 1885 bricks.

The chapter continued to maintain stabile membership and leadership both on campus and within Delta Sig nationally for a number of years. In the late 1960's there was a significant influx of university athletes into the house. The chapter was known for holding leadership positions on campus (student council, IFC, Student Union Board, honor societies, and focused organizations), being very involved in campus activities, and maintaining high scholastic standards.

In the early 1990's Delta Epsilon fell on hard times due to a lack of recruitment. This resulted in the inability to pay for things like maintenance and a cook. As a result, meals were prepared mostly by heating canned or prepackaged food which compounded the recruitment problem further.

By the start of the Fall semester in 1995, it was clear there were not enough members and new members to keep the chapter afloat. The chapter notified nationals that the members were no longer able to sustain a chapter and were all going their separate ways. Ron Hoffman and Ward Merrell, former ACB presidents, met with Tony Smercina from the national office to collect the charter and exchange the chapter's assets to settle its debts with the university. Round House and Long House were signed over to the university in exchange for the university paying off several thousand dollars in outstanding debt and making repairs to the roofs of both buildings to stop the leaking. The buildings were used for university office space and storage for a number of years but were allowed to fall into disrepair. Long house was eventually demolished in 2011, while round house is still used by the university (2013).

In October 1995, the Delta Epsilon Charter was taken back to Delta Sig Headquarters in Indianapolis, IN marking an end to the Rolla chapter of Delta Sigma Phi.

With stimulation from national, the glimmer of Delta Sig at Rolla started again. The high standards of the initial chapter were maintained as members were solicited. Under the on-campus leadership of Faculty Adviser Paul Hirtz, Delta Epsilon was re-colonized in 2006 and re-chartered in 2008.

In August of 2009, the chapter moved into the newly renovated Ramsey Furniture building at 8th and Rolla streets on a lease with an option to buy in five years. 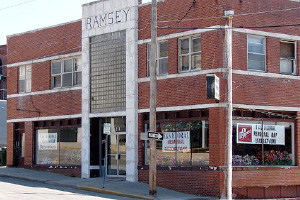 With a lot of talented and dedicated members of the ACB, to include Ron Hoffman who had to shut down the chapter in 1995, the chapter was given the opportunity to flourish. Members committed to grow, develop, and lead until they were once again recognized as leaders on campus, in the community, and with nationals.

In November of 2012 the house was purchased, two years ahead of the most optimistic plans. Due to good financial management from the ACB, strong recruiting of quality brothers by the chapter, and support of the Rolla community, the chapter bought not only the house, but apartments and a beauty salon adjacent for future expansion. They have even received donations from businesses to help with purchase of the house.

On campus members hold leadership roles in many campus organizations and maintain one of the highest grade point averages. The chapter actively participates in the Downtown Business Association and in the past has assisted or participated in special functions including the Rolla Annual Arts and Crafts Festival and Celebration of Nations. Delta Epsilon has won, and continues to win, numerous awards on campus and with the national fraternity. 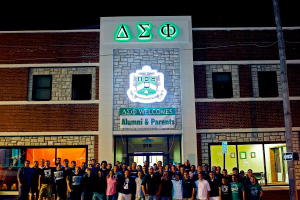